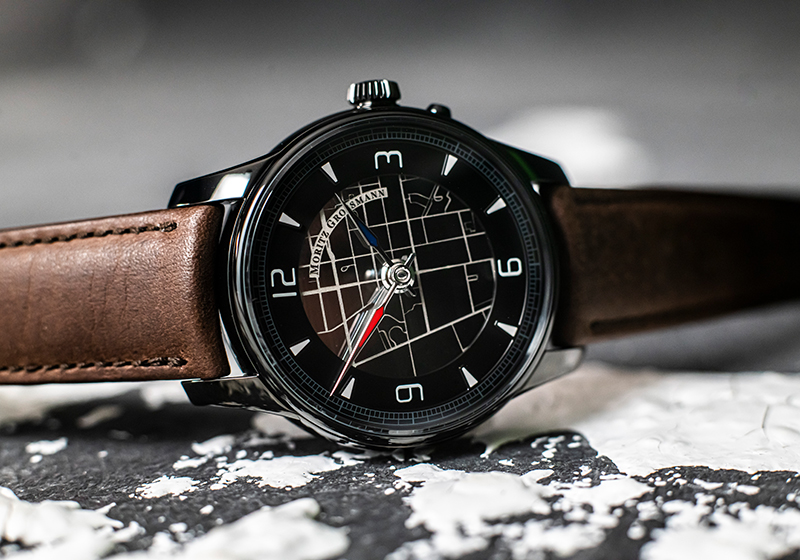 “Mr Gorbachev, tear down this wall!” When US President Reagan called for Soviet President Gorbachev to tear down the Berlin wall on 12 June 1987, he probably did not dare to believe that just two-and-a-half years later, all borders within Germany would be open and three years after his speech, all border controls would be removed.

On its dial, the special model 1989 by the independent Glashütte watch manufactory Moritz Grossmann shows the streets around the infamous border post Checkpoint Charlie in Berlin, which separated Friedrichstraße from the Zimmerstraße to Kochstraße junctions during the Cold War. This is where American and Soviet tanks faced each other on 25 October 1961 when the hitherto “Cold” War threatened to heat up. Based on the colours of NATO flags and the former Warsaw Pact, the hands of the 1989 are blue and red. The sapphire glass back on the rear of the watch is decorated with a laser engraving in the form of an outline of Berlin during the time it was divided into the western sector on the one side and the eastern sector on the other, as well as the inscription of the anniversary date of the opening of the Wall on 9 November.

The movement is a Grossmann calibre 100.1 in High Artistic Finish which is the most elaborate stage of finish offered by Grossmann. The components of the calibre are made from untreated German silver with varying finishes and form the various levels. The pillar movement consists of the main plate and the 2/3 plate which are precisely spaced apart by two movement pillars and the barrel bridge. Raised gold chatons and pan-head chaton screws are testament to the high quality.

Hand-polished chamfers on going-train wheels and the edges of levers and springs create a special depth and light reflections. The Grossmann balance and the Glashütte stopwork, crafted entirely in-house, create the space needed for the Grossman manual winder with pusher.

The watch has a sporty stainless steel case in a matt black look. The dark brown calf leather strap subtly rounds off the elegant appearance.

The 1989 watch will be available exclusively from the Moritz Grossmann concessionaire Juwelier Leicht in Dresden and Hamburg.

Grossmann Uhren GmbH is based in picturesque Müglitztal in eastern Germany on the border between the Eastern Ore mountains and Saxon Switzerland. People from various countries on both sides of the former Iron Curtain now work together to make timepieces of the highest handcrafted quality. Under the motto Schönstes deutsches Handwerk, traditional precision mechanics are combined with state-of-the-art construction and finishing technologies. The Grossman 1989 will be released as a one-off piece.

With the title “makro: Die Rübermacher – Vom Westen in den Osten” (“makro: Those who crossed over – from West to East”), 3sat-Wirtschaftsmagazin presents a documentary on 8 November 2019 at 9 p.m. asking the question of what inspired people to move from West Germany to the east of the Republic after the fall of communism.

The programme portrays people who were drawn to Germany’s east. Among them was Christine Hutter, founder & CEO of Grossmann Uhren GmbH. The trained Bavarian watchmaker moved to Glashütte in 2008 and founded the Moritz Grossmann manufactory with the name of the famous Glashütte watch pioneer and initiator of the German Watchmaking School.

The documentary is already online available in the 3Sat Mediathek 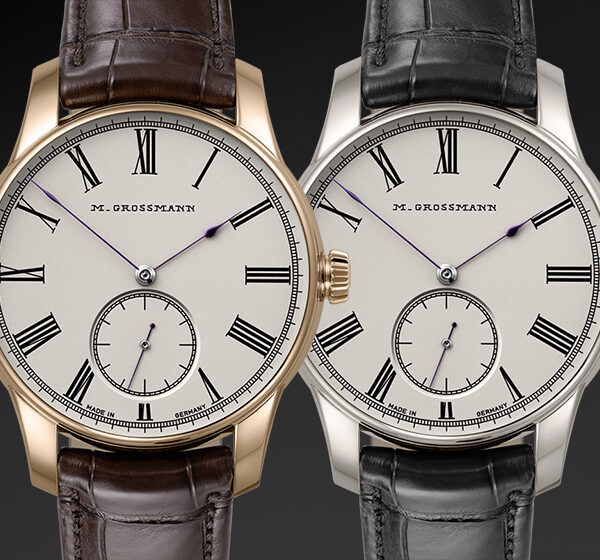